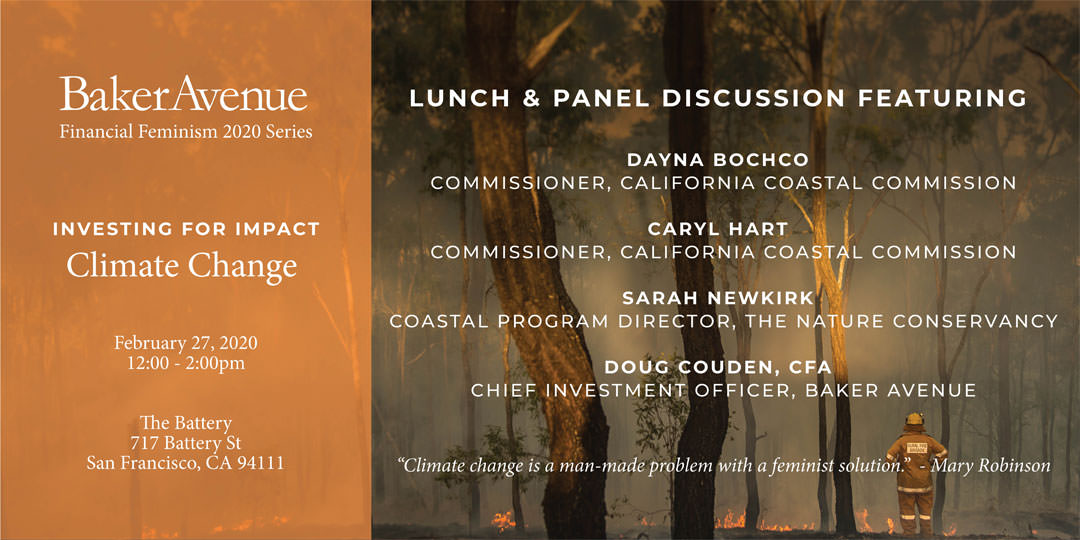 Please join us for an exclusive Lunch & Learn conversation to understand how best to align your values with your time and investments to ensure the greatest positive impact on Climate Justice.

Climate change disproportionally affects women and is a global health, economic and environmental emergency that threatens to reverse decades of development gains, cause widespread human suffering, deepen global inequities, and put at risk the environmental and economic systems we depend on for our survival.

As we witness the unprecedented Australia and California wildfires, record breaking heatwaves and storm surges, there has never been a more crucial moment for action. As Mary Robinson, former President of Ireland and Climate Activist notes, “Climate change is a man-made problem with a feminist solution.”

Join us to find out how to best use your talents and resources to make a difference. 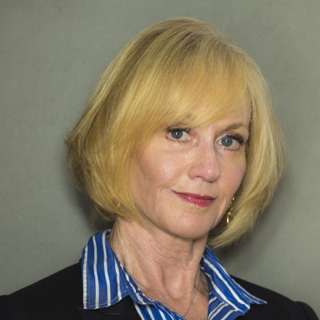 Dayna Kalins Bochco, currently sits on the California Coastal Commission, serving as its chair from 2016 through 2019. Bochco has been an active member of NRDC for many years and is a past co-chairperson of the LA Leadership Council. She has previously served on the boards of Heal the Bay, the Santa Monica Bay Restoration Commission and most recently the State Coastal Conservancy.

Caryl Hart, PhD is an attorney and expert in public lands and park policy, with over 25 years of advocacy, scholarship and administrative experience. She was appointed to the California Coastal Commission in 2019 by Assembly Speaker Anthony Rendon. Dr. Hart previously served for 13 years as a member of the California State Parks Commission, including seven years as Chair.

In 2014, Dr. Hart was appointed by Governor Brown to serve on the Parks Forward Commission to assist in forming a sustainable path forward for the California State Park System. From 2010-2017, Caryl was Director of Sonoma County Regional Parks, a system of 50 parks and regional trails including Doran, Stillwater and Gualala Pt Regional Parks on the Sonoma Coast, and Spud Pt Fishing Marina in Bodega Bay.

As a native Californian, born in Los Angeles and raised in the Santa Barbara area, Dr. Hart is dedicated to the protection of our coast and ocean, and in insuring maximum public access for all Californians and visitors to our state. 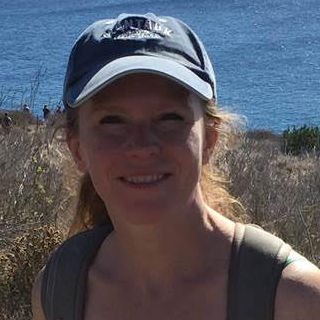 Sarah Newkirk develops and implements TNC-CA’s statewide Disaster Resilience Strategy, which works with landowners and policymakers to undertake and implement land protection, restoration, and strategic retreat in high-risk areas as they prepare communities to be resilient in the face of climate-mediated natural disasters.

Since 2005, Sarah has been a leader of The Nature Conservancy’s Coastal Resilience initiative in both California and New York, protecting and restoring coastal ecosystems, and abating land-based threats to the coast as sea levels rise. She pioneered TNC’s Coastal Resilience approach to multi-objective planning for sea level rise and coastal hazards (http://coastalresilience.org) and served as a member of New York State’s Sea Level Rise Task Force. Sarah earned a M.S. in Marine Environmental Science from the State University of New York at Stony Brook and a J.D. (Magna cum laude) from Pace University School of Law. She served as law clerk to the Hon. Thomas P. Griesa, U.S.D.J., in the Southern District of New York.

Sarah has worked as a staff member or consultant for environmental NGOs on water quality and land use issues in California and New York for nineteen years. 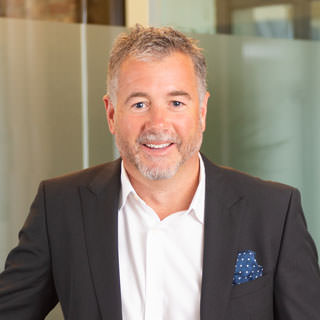 Doug is a tested market specialist with over 25 years of experience managing socially responsible portfolios. Doug manages BakerAvenue’s Impact strategy and has institutionalized the firm’s approach to environmental, social and governance screening. Doug interacts regularly with the sustainable and thematic investing community. He has multiple market cycles under his belt and leads BakerAvenue’s multi-disciplined (technical, fundamental and macro) approach to portfolio management.

He is a Partner and member of the firm’s Executive Committee.